What's on your mind?

We don't really know much about how Lady Izayoi died, but we know Inuyasha was still a kid by then. Possibly she got terribly ill, I guess?

Inuyasha: But mom, you'll die if you don't let me give you your medicine!

Izayoi: Nothing can stop that now. Just for once, let me look on you with my own eyes. Now... go, my son. Leave me.

Inuyasha: No, you're coming with me. I won't leave you here. I've got to save you.

Inuyasha: Mother... I won't leave you. Mother? Mother?![runs off, obviously very scared] Help...somebody...anybody...help. [cries, turns back to the body and nuzzles up under the limp hand so that his mother is embracing him. Pause for effect.]

Okay, okay. We don't know much but I think this is how it went.

I would like to see Inuyasha/Yashahime travel the world, and end up in places like Greece, Egypt and Norway even England and battle new enemies in those areas.

I would like to see Inuyasha and Moroha having crossovers meeting Naruto/Boruto, Yu-Gi-Oh, Yu-Gi-Oh GX, and Yu-Yu-Hakusho. 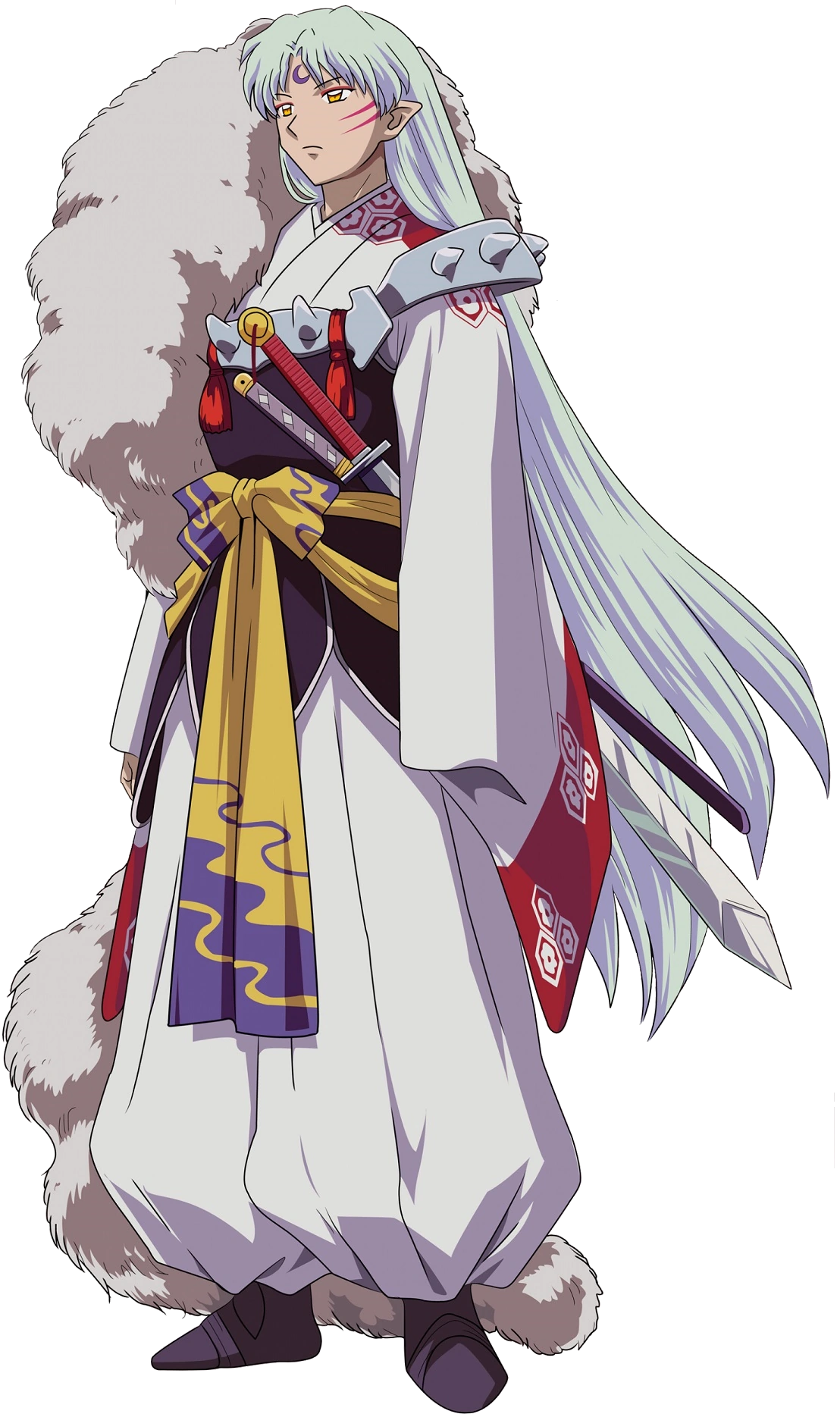 Yashahime Translation: Animage Magazine May 2021 IssueMuses of a Dog

I'm not sure if this was ever mentioned here, I know it has in other sites, but has anyone wondered if Kagome ever triggered changing the future/present? I feel like she plays a huge part in the federal era that she probably changed the future so many times yet everything remains the same whenever she returns home.

I also have some theories that Miroku and Sango might be ancestors of Kagome...

Given how Moroha was raised by the wolf demon tribe during her early childhood, would it be possible for her to visit the den during the course of season 2 and perhaps even introduce Towa to the ones who cared for her?

There are characters' pages with empty sections such as Inuyasha, Kagome and Sango during the Inuyasha story. Until Yashahime resumes again, why not focus on filling their sections? (I would but I'm busy preparing for other fandoms)

Will there be a Yashahime movie? I mean there are 4 Inuyasha Movies.

Does anyone know what fighting style Towa uses?

Just...wow. The episodes were posted when they were said to be?! That's the first. (That I've seen.) With other fandoms, it's like "Oh, new episodes in 2 weeks" and then 2 years later... "Where are the episodes?" Those 3 new episodes were awesome! I've never needed to only wait less then a year for new episodes of such a high quality! They were the best!

SPOILERS ON THIS NEXT PART!!! YOU HAVE BEEN WARNED! IF YOU DIDN'T SEE THE LAST 3 EPISODES!

And how Sesshomaru revived Zero to save Rin from dying? I mean, he rarely uses tetsaiga! And then Zero breaks tetsaiga. Then tetsaiga got some of the fang back?And then he gives tetsaiga to Towa to see if she could revive Sesuna?! And then just left without any instruction given to Towa on how to use it? It's just... Amazing.

When are more episodes coming out?

The tree of ages said that both Kirinmaru and Sesshomaru must die to save Rin. 😭 I am so not ready to watch Sessh go guys! Like seriously he is the greatest character in Inuyasha! He helped and saved and looked after Inuyasha always! I don’t care what anyone says but he is ten times stronger than Inuyasha! Plus he is way better looking!! 😭😭😭

This site keeps asking me to verify my email. Which I’ve done like 20 times already!! Is this happening to anyone else!?

Where is Inuyasha and Kagome? You can't just dismiss the star players in the game!! Bring them back! Someone help me!

In Inuyasha, Sesshomaru's mother said tetsaiga could revive someone once. Why was Jaken able to be revived more than once? Was that only for humans?

According to MY RESEARCH, that I've done extensively on. InuYasha shouldn't be 200+ years old. And here's why:

I’m looking into the fashion and the timeline of InuYasha. Mainly the 12 layered robe that Inu’s mother wore. We all know it’s a Heian Period garment worn by noble women and ladies-in-waiting at the Japanese Imperial Court.

Here’s an interesting fact: “Despite it’s name the jūnihitoe varied in its exact number of layers. The number of layers, and the type of layers, could alter the formality of a jūnihitoe outfit, with some accessories, such as overcoats and a long, skirtlike train (known as the mo) only worn for special, formal occasions.”

The Heian Period was from 794-1185. And InuYasha takes place within the Sengoku Jidai or the Warring States Period. This was sectioned off within the Muromachi or the Ashikaga Period which was from 1333-1573.

Going back to the InuYasha’s mother, SHE CAN’T be of the Heian Period. Yes her hair was loose, down her back and pretty long this seemed to be the style going until the Muromachi/Ashikaga period which our story takes place in. So from 794-1336 the hair style for women of noble, royal and aristocratic birth (even those who had fallen on hard times and were in poverty) was to keep it long and free. And TRUST ME guys I LOOKED FOR HAIRSTYLES FOR THE KAMAKURA ERA. I looked and I found nothing. The only thing I found was the long hair for the women in the Heian Period and then it went to the ponytail thing we see in the series proper though I’m sure that the ponytail thing came in gradually so it the long hair could have stayed in style for awhile in the Muromachi since hairstyles don’t usually change over night. That takes a while for it to happen.

And the original series takes place in 1546. Especially since the introduction of firearms into Japan happening in 1543. And the Band of Seven were executed 15 years before the start of the series, it was stated as such, so they’d would have been executed in 1528. And Kagome meets that one guy from the Oda clan who tells her he’s not Oda Nobunaga who at this point is still referred to as the Idiot/Big Fool of Owari. He was born in 1534. And with InuYasha being bound to the Tree of Ages for 50 years. We’re looking at 1496 for his sealing to the tree.

It’s still Kagome’s birthday 450 years in the past. She had JUST turned fifteen so that makes her birthday c. Early April 1981 to be in the 1996-1997 school year in the modern era.

March 1547 is when Naraku and the Shikon Jewel is defeated and taken out of existence.

3 year time skip puts the year Kagome graduates high school in mid-March of 2000. She’s 18 by this point. And the Since Then special chapter: 6 months.

Kagome returns in mid-March of 1550 making her 18. InuYasha Since Then happens 6 months later in mid-September of 1550. She is 19 six months later.

Kin'u and Gyokuto are born a year later after Naraku’s defeat in 1548 with Hisui being born just after Kagome come back in 1550.

The manga said that InuYasha’s dad died from wounds that were in result of his battle with Ryūkotsusei. The 3rd movie states when this was and how he died, but it again was a product of Sunrise. Rumiko did some character designs and some storyboard treatments I’m sure, but everything else from a timeline perspective was solely the studio’s decision. The films are side stories and are not canon to the timeline of the series.

So in terms of timeline InuYasha stopped aging in the human sense once he hit puberty and he looks to be about 15 years old. And puberty for HUMAN BOYS is between 12-16. And if he ages until he hits puberty then he hit it at between 12-15 years old in humans years and stopped aging like a human once that happened. He states both in the third chapter of the manga and the 2nd episode of the anime that he doesn’t have to worry about getting old, at least for a while. INUYASHA is 150 years old IN THE ORIGINAL STORY. His birth year has to be around 1396 for the sealing to take place in 1496.

Unsealing from the Tree/Kagome comes to the Sengoku Jidai: Early April 1546.

We DON’T KNOW WHEN EXACTLY OR HOW INUYASHA’S MOTHER DIED. Just that she died a long time ago. So it’s hard to pin down exactly. But for sure she wasn’t born and lived in the Heian Period and Inuyasha isn't 200+ years old YET.