InuYasha the Movie 4: Fire on the Mystic Island 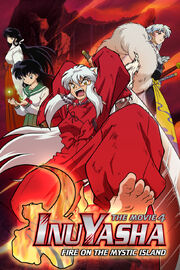 InuYasha the Movie 4: Fire on the Mystic Island (映画犬夜叉 紅蓮の蓬莱島, "Eiga Inuyasha: Guren no Hōraijima") is the final InuYasha movie. It was released in Japan on 23 December 2004, a few months after the last episode of the television InuYasha series aired, but before InuYasha The Final Act was released. The film has been licensed in America by Viz Media and was released on 1 August 2006.

An additional title is Fire on Horai Island.

A small group of children on Hōrai Island (whom we later learn to be half-demon) watch as a Kikyō look-alike develops in a green orb, then stand in front of the Cauldron of Resonance while it comes to life. Four scars, the Mark of the Four War Gods (Ryūra, Jūra, Kyōra, and Gōra), appear on all of the children's backs except for the youngest girl, Ai. Asagi, the oldest, tells Ai to leave the island while she still does not bear the mark and says her goodbye. The Four War Gods find out that Ai has escaped and try to retrieve her, but Inuyasha and the others defeat Gōra and save Ai, who later asks Inuyasha to save the others on Hōrai Island. Later, while Ai rests, Inuyasha explains the myth of Hōrai Island, a place that appears once every fifty years. He remembers fifty years ago, when Kikyō took him to the island to meet the half-demon children. Suddenly, the Four War Gods appeared. Gōra sucked some of Kikyō's blood (which was used to make Kikyō's doppelgänger), and Ryūra marks Inuyasha's back with the scar, saying that he would never be free from them once he has the scar on him. The gang decides to head to Hōrai Island to investigate.

The villagers all panic upon seeing the island. In a small hut, Kikyō listens to a man's tale of Hōrai Island, then leaves, saying she will defeat the demons. The rest of the villagers rush to the shrine and start praying for divine protection from Kyōra, who proceeds to burn down the shrine and kill many of the villagers until Sesshōmaru arrives. As Inuyasha and company near the island, Jūra appears and fires his Thunder Cannon at them, destroying their boat. Miroku and Sango fly away on Kirara, pursued by Jūra, while Inuyasha, Kagome, and Ai escape to the beach, where they meet Ryūra. In the ensuing fight, Ryura easily deflects Inuyasha's Wind Scar with his Earth Dragon Gale, then calls upon his Dragon Lightning and nearly kills Inuyasha, but Kagome stops him by firing a Sacred Arrow. Ryūra is forced to retreat, but not before he hurls some insults at Inuyasha. Back at the village, Kyōra use the Crimson Demon Fan to defeat Sesshōmaru, but Sesshōmaru still alive as with the use of Tōkijin, he cut the Birds of Fire and drives Kyōra off with his Dragon Strike. After the battle, he remembers back to his first encounter with Kyōra, when he was marked by the scar. Jaken asked him to capture that god that he got away, but he answered no. Jaken asked that why did Rin bring it up, but Rin didn't say a thing about it, as they didn't see the mark on Sesshōmaru's back. And Kikyō can't leave the village and allow "this mindlees destruction to continue".

Ai leads the group to the village, where they find Asagi singing the "Song of Parting," together with the other four children. When Inuyasha reveals his plan to confront the Four War Gods, Asagi begs him to reconsider, saying they'll all be killed. The gang learns that Asagi is going to sacrifice herself to the Cauldron of Resonance, and she argues that her death will allow the others to live a little longer. They all follow Asagi to the Cauldron, where Inuyasha attempts to destroy the Cauldron with no success. Suddenly, he and Asagi are pulled into the Cauldron as it closes. On the outside, the rest of the gang and the children try to open the doors, while on the inside, Inuyasha feels his strength waning. Then, Lady Kanade, the priestess who fought the Four War Gods many years ago, appears. After telling Inuyasha after more about the history of the island, Lady Kanade lends Inuyasha her remaining strength along with the War Gods' power spheres, telling him to destroy it as soon as possible and that it must never be opened. In return, she asks Inuyasha to save the children, then gives her blessing to Asagi before she disappears. Inuyasha calls upon Adamant Barrage and destroys the door to the Cauldron, accidentally breaking Kagome's bow in the process. The War Gods have sensed that the jeweled comb box has been removed from the Cauldron, Jūra was excited to regain their original power, Kyōra tells him not so fast that they must take possession of the box first, and Ryūra prepares the Kikyō doppelgänger.

Just then, a Kikyō look-alike appears and takes the power spheres from Inuyasha. He chases her to the War Gods, where she opens the box, releasing the spheres to their owners. While Kagome, Shippō and the children attempt to make a raft to escape, the Kikyō doppelgänger attacks Inuyasha. At the Cauldron of Resonance, Sesshōmaru appears and finds Kyōra waiting for him. Meanwhile, Sango and Miroku fly on Kirara to confront Jūra and the resurrected Gōra. Miroku use the Wind Tunnel to suck Jūra but the Thunder Cannon, instead, it causes Jūra to transform to his true form. Inuyasha battles with the Kikyō doppelgänger and is about to lose when the true Kikyō appears and defeats the impostor, then leaves her bow behind. Sesshōmaru easily defeats him with another Dragon Strike, it causes the first mark of the Four War Gods to disappear. Meanwhile, the children were surprised see mark which means that they will be free from the War Gods' slave. But then, Ryūra shows up and going to stop them, so Inuyasha hurries as he finds that Ryūra attacking Kagome and the children. Miroku using his Wind Tunnel, he redirects Gōra's blasts so that it hits Jūra, before Sango finishes him off with Hiraikotsu.

Meanwhile, the children tells that another mark disappear, Shippō protect Ai, Asagi, Shion, and Moegi from his Wind Blast and they thanked him, and protect them with Inuyasha's Wind Scar by blocking Ryūra's Wind Blast as he arrives as he going to fight and kills him. After the defeat of Ryūra, Gōra is going to destroy the island. With only Gōra remaining, Miroku spears Gōra's sphere on his mask of his head with his staff, greatly weakening it. Inuyasha jump off from the cliff and use Backlash Wave, he killed the last War God.

However, the battle does not end here; all the power spheres combine to create one final War God who seems unstoppable. Kagome knows only a combination of her sacred arrow and Inuyasha's Bakuryūha (Adamant Backlash Wave) can destroy it, but she cannot fight because her bow was broken. However, the fireflies (spirits of the island residents who had been previously sacrificed, which is Shion's mother) lead Shion to Kikyō's bow. On the way back, the children join hands and bring the bow to Kagome. Finally, with the fireflies' blessing and Kagome's arrow, Inuyasha unleashes his Adamant Backlash Wave to defeat the War Gods. As the gang and the children leave the island, it crumbles into the ocean, putting the myth of Hōrai Island to rest.

As the credits roll, Kirara and Shippō pulled the raft to the shore, it is indicated that the children spend some time with the gang at Kaede's village.

After the end credits, Rin asked Sesshōmaru where he has been. But Jaken tells her to cut it out to not bother him unnecessary questions. But she wants to know and catches up. Meanwhile, Inuyasha and the gang tells the children that its the feudal era in the outside world, and no shortage of demons that prey on half-demons. Asagi said that they don't have to be worry about it as the children will be fine and survive on their own. She thank to Inuyasha for everything before departing as a group of six to face the world by themselves. After the children left, Inuyasha and the gang starts to move on.