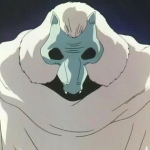 I love InuYasha so much! There is so much I want to say about InuYasha; it has well and truly stolen my heart.

There are so many fantastic characters in InuYasha, my favorites include Sesshōmaru, Kōga, Naraku, Sango, Bankotsu, Hakudōshi, Kagome and of course Inuyasha himself; I haven't been able to decide on my absolute favorite character yet, but it probably is between Sesshōmaru and Inuyasha (heh, not very original, I know). Frankly, I love just about every character that has been introduced in the series; these characters are so rich and are much more than simple 'stock' characters, each has his or her own unique personality and they all have their own personal motivation for their actions. The female characters on the show are absolutely fantastic, and are all extremely memorable. Kagura and Kikyō, in particular, are so interesting in my opinion. Eventually I'll elaborate on why I love each character so much.

The music in the anime is absolutely exquisite, each character or situation (for the most part) has their own unique 'theme' music that plays during their major scenes, and the scenes are so much more powerful because of it. I've gotten extremely emotional because of the combination of what is taking place accompanied by the music played alongside it. I'm not very familiar with the exact names of each of the songs (I'll bet the official names are in Japanese) but my favorite pieces of music are Kagome/Inuyasha's 'love' theme, Sango's, Hakudōshi's, Naraku's and Kikyō's themes.

These are my favorite moments/episodes from the original InuYasha anime:

Retrieved from "https://inuyasha.fandom.com/wiki/User:Super_Shmevan?oldid=69251"
Community content is available under CC-BY-SA unless otherwise noted.